The Early Woodland period, which began in the Ohio River Valley about 1000 B.C., witnessed the introduction of several substantial lifestyle changes for some of its inhabitants, including: an increasingly sedentary lifestyle due to the cultivation of plants; more elaborate burial rituals which included the construction of conical burial mounds or elaborate earthworks; the introduction of pottery; and an enlarged trading network. The most prominent culture within the Early Woodland Period is the Adena, which was given its name by the archaeologist William C. Mills in 1902 after his excavations on the Adena plantation at Chillicothe revealed definitive cultural attributions which turned the location into a 'type site' against which all subsequent suspected Adena locations were compared.

The Adena helped to initiate what is now known as the Eastern Agricultural Complex, a domestic farming revolution which allowed them to cultivate plants such as squash, sunflower, and pumpkins. Despite their growing interest in agriculture, they maintained a hunter-gatherer lifestyle, building temporary settlements which they returned to during the year.

Perhaps the Adena culture’s best known activity is the creation of conical burial mounds. This represents a major change from comparatively subtle burial habits of the Archaic period when the dead were typically buried outside campsites with largely utilitarian grave goods. The Adena people built conical mounds and small circular earthen enclosures, which were typically built in prominent locations in the Early and Middle Adena cultures, often at the edges of river valleys, and served as public monuments. The Late Adena culture tended to cluster mounds together, such as in the Wolfe Plains Group. These structures, particularly the largest examples, were built up over many years as burials were stacked upon those of the initial inhabitants; in many cases the mounds could reach over thirty feet tall. Burial mounds were viewed as sacred, and are interpreted as communal sites where ceremonies, whether joyous or contemplative, were held.

Despite their communal nature, only a select few, normally those of a privileged status such as shamans, were buried within mounds. Grave offerings reinforce this idea, with high-status goods such as elaborate personal adornments and artistic trinkets, although there have been burials uncovered in which no grave goods were found, indicating a lower-status individual. Evidence found within excavated mounds suggests that the remains were first buried in a wooden container then sprinkled with ochre or another colorful mineral before the mound was constructed over the remains. Occasionally, the wooden structure was first burned before the mound was built. However, it is important to note that not all Ohio Early Woodland burials involved mounds. In Northern Ohio, for example, Native American cultures chose to bury their dead in earthen enclosures, and there is evidence that the Adena occasionally adopted this trend in sites such as Seaman’s Fort in Erie County, Ohio.

Another important trait of the Early Woodland Period in Ohio is the commencement of pottery in this region. Prior to its introduction, cooking was a comparatively difficult task involving hot stones dropped into waterproofed bowls. Pottery allowed for cooking directly over an open fire, which reduced the necessary cooking time. Its decoration was largely plain, though most Adena-style pottery was thick-walled with straight sides, with a conical base and a relatively wide mouth.

Although trade networks were used during the Archaic period, they grew under the Adena. Copper from the Great Lakes, marine shell from the Atlantic and Gulf Coasts, and mica from the southern Appalachian Mountains have been discovered in grave goods. This may have reflected a growing desire to connect with distant tribes for social reasons, and certainly allowed community leaders to emphasize their personal status. Trade routes were another way for the Adena culture to spread its artistic and burial styles: several mounds in Canada and New York were clearly modeled on those of the Adena. 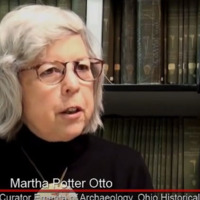 In this video, courtesy of CERHAS, Martha Potter Otto discusses the history of dating the Adena period. 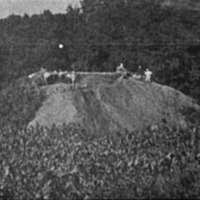 Adena Mound, the 'type site' for the Adena culture, was located on the Adena mansion built for Thomas Worthington in Chillicothe, Ohio. It was excavated by William C. Mills in 1904 and now only the base survives. This image shows the mound with the top sliced off and Mills' archaeological team on the top for a scaled reference. 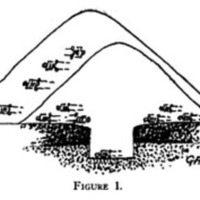 The drawing by William C. Mills shows the position of the burials within Adena Mound (shown as small black skeletons) and how the Adena Mound expanded across its history. The initial burials, shown in the depression within the soil and the smaller mound, were covered over by a larger mound, whose base expanded an additional 50 ft, as demonstrated in the overarching mound. 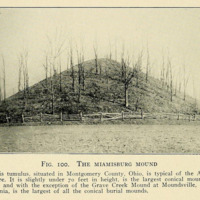 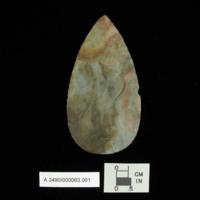 This is an example of one of the most common shapes of blades in the Adena culture. Such blades were used for hunting and ceremonial reasons: cachets of leaf-shaped blades have been discovered in bogs across the Ohio River Valley. 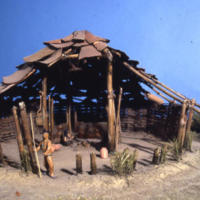 Adena houses ranged from 15-90 feet in diameter and were created from large posts and bark. Several structures survive under mounds: the Adena burned these structures before mound construction, but the post holes survived. 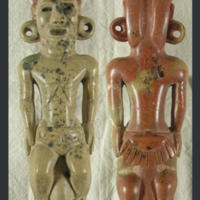 Discovered by William C. Mills during his excavation of Adena Mound, the Adena Pipe depicts a mostly nude man dressed only in a small loincloth. His chest is decorated with a serpentine pattern and he wears large ear ornaments. During its initial burial within the mound, the pipe was covered with a deposit of iron ore, which survives in the form of red blotches across the pipe. 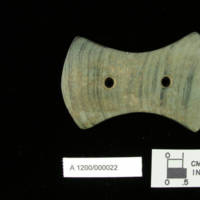 Used for personal ornamentation, with a piece of hide attached to the two holes and possibly used as a necklace. 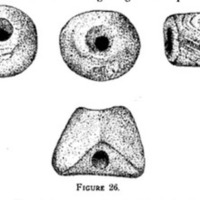 These shell beads found in the Adena mound and reproduced by William C. Mills were found near a skeleton along with c. 500 shell ornaments and c. 500 bone ornaments and freshwater pearls. 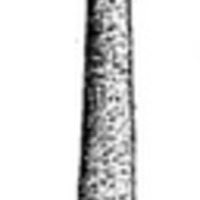 This awl, along with ten others discovered in the Adena mound, was created from an elk shoulder blade. Awls were multi-purpose tools which could be used, among other things, to pierce animal hides and construct woven baskets. 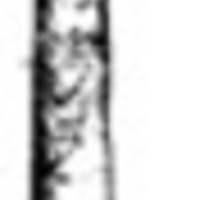 This needle, 7 1/4" long, was created from an elk bone and was used to create clothing. 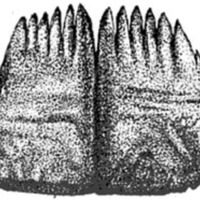 This comb, made from what was presumably originally one elk bone, is 4 inches long. 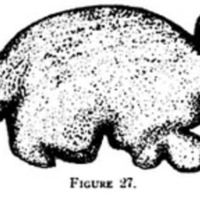 This raccoon effigy ornament is made from shell and has two holes on its back side which were used to attach the ornament to an animal hide necklace or bracelet. 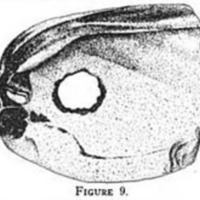 This shell hoe was used in Adena agriculture to soften dirt before planting. The basic concept of this tool survived throughout the Fort Ancient culture. 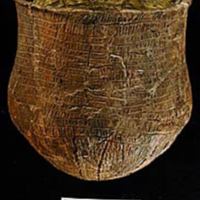 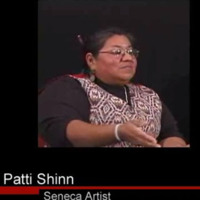 In this video, courtesy of CERHAS, Patti Shin, a Seneca artist, discusses trade routes. Although the items traded and trading partners changed during the Early Woodland to Late Prehistoric periods, the essential purposes of trade remained constant. 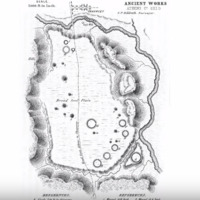 This video, courtesy of CERHAS, discusses the history of the Wolf Plains area and earthworks. 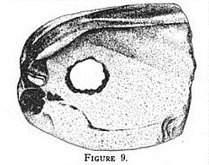 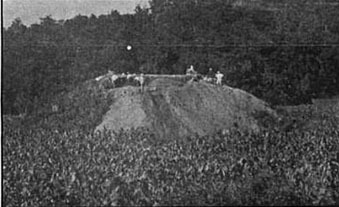 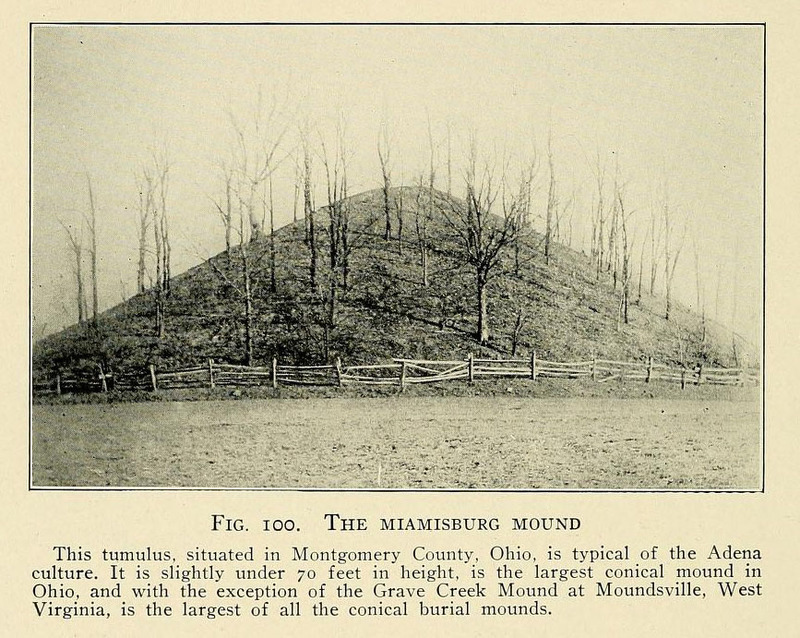 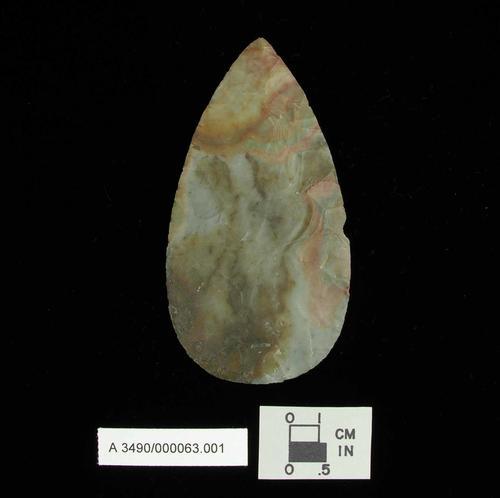 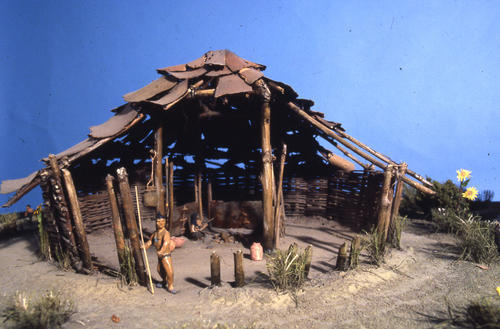 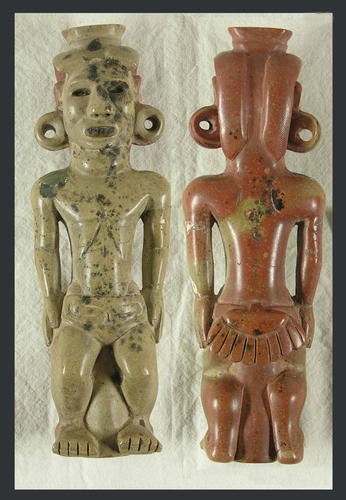 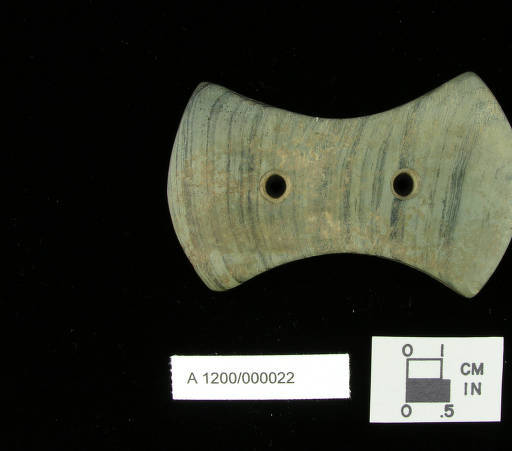 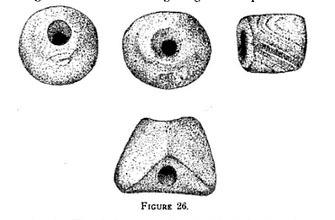 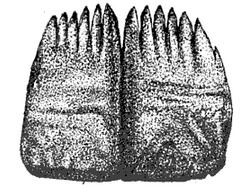 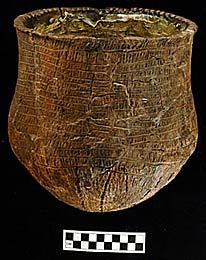