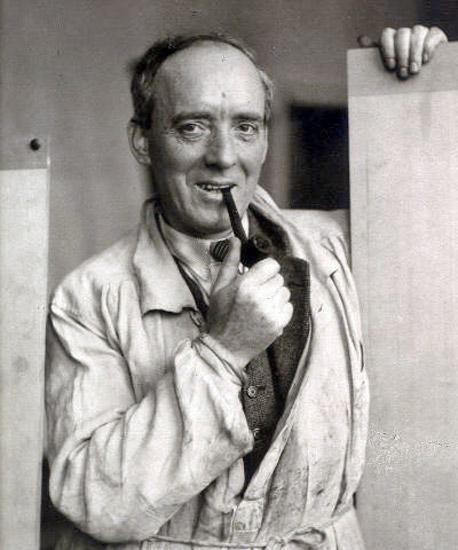 Born in Scrabster in the far north of Scotland, was an art teacher who almost single-handedly revived interest in Celtic and Insular art.

His book Celtic Art: The Methods of Construction was published in 1951. It had little impact at the time, but on its re-issue in 1971 it introduced a generation to Celtic knotwork, the Pictish stones, the Book of Kells and the Book of Durrow. As well as describing and illustrating over 200 historical examples, his book was notable for giving detailed instructions on creating similar interlace, spiral, and trumpet designs, and encouraging their use in craftwork.  He served in Macedonia during the First World War and returned to take up the position of Principal Teacher of Art at Kirkcaldy High School, Fife, remaining in this post until his retirement in 1946.

Bain's monograph inspired the design for the cover of King Crimson's Discipline album; in later releases, it was replaced by a knotwork designed by Steve Ball, which has also been used the logo of Discipline Global Mobile and Guitar Craft, a music company and a musicians' association each founded by King Crimson's Robert Fripp.  A Bain design was also used to illustrate a rug manufactured by Quayle and Tranter, a former manufacturer of carpets based in Kidderminster, England.

The majority of Bain's known existing works are HERE! curated by the Groam House Museum in Rosemarkie, Scotland.

The collection largely comprises works of art on paper, primarily his Celtic teaching aids and designs for commissions, but it also includes metal printing plates, etchings, lino blocks and prints from the blocks, textiles, embroidered tea cloths, a hand-knotted carpet, manufactured rugs, carved and decorated woodwork and sculptures, decorated ceramics, jewellery and leatherwork together with his supporting archive of printing proofs, correspondence and photographs. The Groam House Museum collection is unique - no other UK museum (national or regional) has invested in the work of George Bain.

Groam House Museum is developing the Bain collection with financial assistance from the Heritage Lottery Fund.  Research is being carried out into what items of Bain’s are still in existence and are potentially available for purchase, allowing the museum to identify gaps in the collection, and also identify which areas of the current collection need to be developed.  Research into what important items of Bain’s work exist and would benefit from collection, preservation and conservation is also under way. The Directors and curator are particularly interested in his work in carpet design, as this represents the only commercially-produced element of his design work. Their plans of working towards establishing a comprehensive and nationally-recognised collection which would represent and preserve the diverse range of Bain’s work succeeded in November 2013 when Museums Galleries Scotland formally recognised the collection as having National Significance.

Items from George Bain Collection which are not on display, and are in storage, can be seen by appointment.