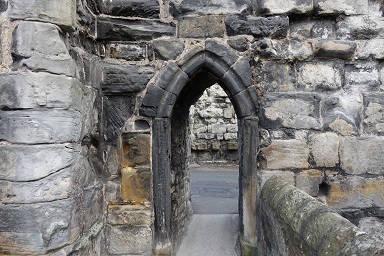 At the east end of South Street there is a pair of fourteenth-century arches known as "the Pends". These were part of a gateway to the walled enclosure surrounding St Andrews Cathedral. During the Middle Ages many cathedrals and monasteries had impressive gatehouses controlling access to and from the religious community. The Pends were originally covered by stone vaults (the supports for which can still be seen). The gatehouse is thought to have also had an upper storey with accommodation for a porter. Following the Reformation a pension was paid to the porter's widow.

The Pends fell into ruin soon after the Scottish Reformation. A drawing from the 1580s (less than thirty years after Scotland's official adoption of Protestantism) shows that the gatehouse had already lost its roof.

"Pend" is a traditional Scottish word meaning arch or vault, hence the name "the Pends".

A local superstition claims that if a true genius walks through the Pends the archways will collapse.

← Panorama - Cathedral Cloister
Images of the Pends →
The Pends